October is an interesting month when the Chinese celebrate the Nine Emperor Gods Festival from the 5th to the 13th of October, (the 1st day to the 9th day of the lunar calendar) while the Hindus celebrate Navratri, the Nine Nights Festival which will be dealt with in a later issue.

This period it is often very rainy, although the Northeast Moonsoon has not started. People braved the rain to see the opera which runs on all nine days of the festival at predetermined times. 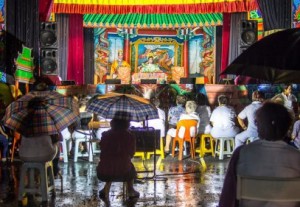 An opera in the rain

One has to be an opera lover to enjoy the very slow pace and the very shrill voices of the female singers, otherwise it is mostly the costumes which attract the young audience. 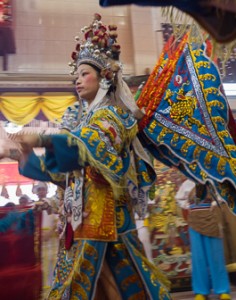 The grandeur of the opera costumes

In every temple there will be very dense smoke from the lighted joss sticks of the devotees which causes tears in the eyes. Enormous amounts of incense sticks are burnt as part of the offering. Incense sticks with dragons on them are a common sight. 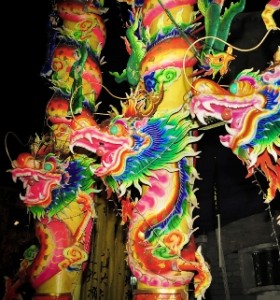 Vegetarian food is offered in abundance for cleaning the soul and body. The ingredients are donated by the Chinese sundry shops and well to do people because they wish that the Nine Emperor Gods would bless them with security and even more prosperity. Many foodstands offer red and yellow buns shaped like tortoises with wishes written on them for sale. These are on every altar or are offered to friends and relatives. 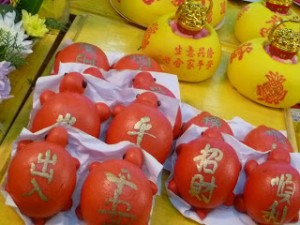 One version of the origin of this festival is that the Chinese believe that the Nine Emperors are the sons of Dou Mu, Goddess of the North Star, the registrar of life and death. They are worshipped as one entity and are believed to be the guardians of health, wealth and prosperity.

On the eve of the festival, the devotees assemble in the morning at the Temple of the Nine Emperors. They start by raising a lantern on a pole in front of the temple. At an auspicious hour around midnight they proceed to the seashore or river bank to receive the Nine Emperor Deity, who would would sail in.

By which time the new moon or the 1st day of the ninth lunar month would have begun. This Deity is invited into the royal palanquin and escorted by the procession back to the temple. 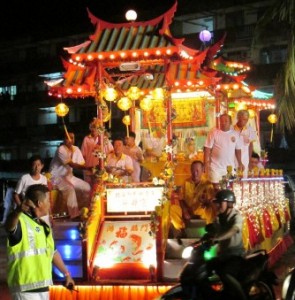 The procession to receive the Nine Emperors 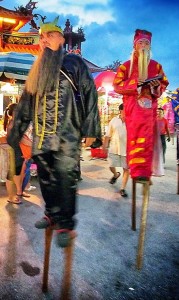 Members of the welcoming procession

This year the soldiers of the Diety will be fed on 3rd and the 6th day. The devotees pray and offer them vegetarian food. Many rituals like dipping the hand in very hot oil, skewering/piercing, tossing heated iron balls or sitting on sharp knives take place on the other days. These practices are similar to the christians in the 13th and 14th century who used to practice flagellation. The Bridge Crossing Ceremony, which is one of the most important is carried out on the 8th day to bring balance between Yin and Yang. Participants in this ceremony would overcome the Yin or watery forces in their lives. 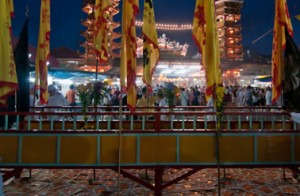 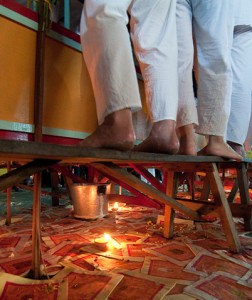 Details of the bridge: water in buckets, one of seven oil lamps and ritual papers

The ultimate highlight is the firewalking ceremony on the 9th day, where only men are allowed near to and on the fire. Thus the males would be completely Yang. Fire is Yang. 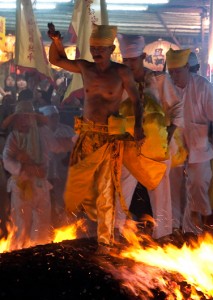 Walk on burning coals – to replenish the Yang forces

After walking over the fire the devotees bid farewell to their Nine Emperors and will proceed in a procession with the Effigy of the Nine Emperors in a float in the form of a boat to the waterway on their way back to heaven.

8th Offer in the Year of the Snake