Would you like to know what the Chinese people eat on the 5th day of the 5th Chinese lunar calendar month which corresponds to 12.06.2013?

Below you see what they eat: 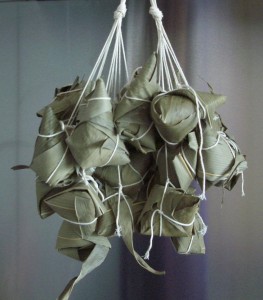 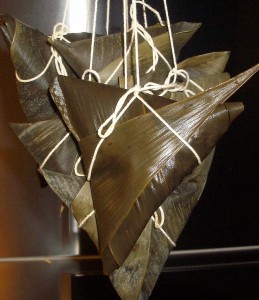 These are rice dumplings wrapped traditionally in bamboo leaves. They come in different shapes and with different fillings making the differences in tastes. The Chinese call them zhong, chang, zongzi depending on which dialect they are speaking. Eating zongzi originated in a myth.

Qu Yuan, a Chu State Minister, between 476 – 221 BC, defended his state against the State of Qin. Both states were among the seven warring states. Consequently he was exiled. During his exil he composed many poems among which is “Jiu Ge” (nine songs). In 278 BC on the 5th day of the 5th lunar month he drowned himself because his country was defeated by the Qins. The local people searched the river with their boats while throwing eggs and wrapped rice to keep the river creatures and spirits away from his corpse resulting in the rice dumpling or zongzi festival and the dragon boat races each year on this day.

In South East Asia rice wrapping is quite common. In Malaysia, Singapore, Indonesia, Brunei and Philippines there is a very elaborate version without filling called ketupat and it is served with rendang, satay or gado-gado. Malaysians, Singaporeans and Indonesians eat them mainly on festive occasions like Hari Raya, the Muslim New Year or a wedding. Ketupat is also on offer by specialized food stalls in the evenings in the food courts in Malaysia.

One could consider the Turkish sarma and the Greek dolma wrapped in wine leaves; the Serbian and Bosnian sarma using wine or white cabbage leaves; likewise the Romanian sarma or the Polish golabki in cabbage leaves to be a relative of the Chinese zongzi.

Preview of 5th Offer in the Year of the Snake