The birthday and the enlightment day of the Goddess of Mercy occur in July and will not be dealt with because there is not much ado about these 2 days. Instead there are two festivals  worthwhile getting to know. The first festival dates 13th August 2013, the 7th day of the 7th month on the Chinese calendar.

Many Chinesc call this the double 7 day or festival. The westernised Chinese call it the Chinese Valentine day. The legend behind this runs:

Long long ago, there lived a cowherd (or Niu-Lang) who had to slave for his brother and sister-in-law, his only relatives who drove him out of their house with only the clothes on his back and an very old ox. Despite been hungry and tired, he gradually built a hut of straw, twigs and leaves and he worked hard to grow food which he fed to the ox and himself. One fine day the ox talked to him and told him, that it was a star in the night sky which had stolen some grain seeds to give to a man. Its deed displeased the King of the skies who punished it by changing it into an animal which must toil on earth until its death. It also told Niu-Lang that several young goddesses would come in a few days to bathe in the pond near to his hut. One of them is King of the skies’ granddaughter, who is virtuous and kind and if he should hide her clothes while she was in the pond, she would become his wife.

Niu-Lang did exactly that. The young goddess, Chi-Nu, who could not fly back into the sky naked, remained, fell in love with Niu-Lang and married him. Three years later they had twins, a boy and a girl, named Gold and Jade.

On its deathbed the old ox instructed Niu-Lang to preserve carefully its hide which could enable a man to fly.

Meanwhile the wrath of the Queen of the skies came upon them. She came with her soldiers and recaptured Chi-Nu. Niu-Lang came home from the field and saw Gold and Jade crying. They told him why. At once Niu-Lang put them into the wicker baskets hanging from the  pole on his shoulders, put on the ox hide and flew after the Queen. The Queen heard them, turned around and created a huge raging river in their way. Thus Niu-Lang and the children could not reach Chi-Nu. The King of the skies took pity on them and decided to allow them to meet once a year on the 7th day of the 7th month.

So some people say: Niu-Lang is Altair and Chi-Nu is Vega, the river separating them is the mikly way and that on the 7th night of the 7th month, these two stars are closest to each other. 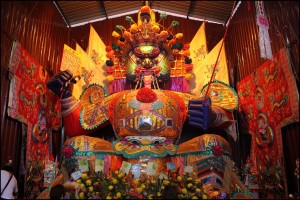 The second festival on 14th day of the 7th month, 21st August 2013 is the day of the hungry ghosts. Then the gates of  hell open to let out the hungry ghosts, which are doomed to starve eternally in the nether world because they had no descendants or they were cruel and evil in their previous life. These ghosts would roam the earth in search of a replacement in hell for them or for food to assuage their starvation.

Hence many Chinese avoid leaving home at the night during this time. They avoid marriages and house moving, buying property or establishing a business, as well as trips overseas. Alternatively they could placate these spirits with a Chinese opera where the spectators do not sit in first row and with joss sticks, sumptious meals and various earthly goods like paper TV, cars… left along the roadsides or at street corners to distract them from entering their homes.

On the last day of the ghost month, 4th September 2013, the gates of hell will close. Floating lanterns will be set on waterways outside the houses to guide the ghosts back to hell. Taoist priests will chant prayers to tell the ghosts to return to their nether world. These would be accompanied by huge bonfires of the ghost effigies, offers of food and earhly goods; surely contented ghosts will leave the earth in peace(?).

A link for those who are interested to see the offers and the bonfire: http://www.youtube.com/watch?v=d3yoWqd5meg

6th and 7th Offer in the Year of the Snake