As promised, here are the photos of the banana tree mentioned in the last Newsletter. 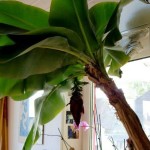 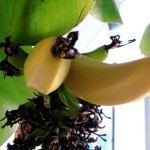 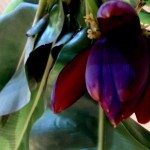 Close-up of a banana flower

The purplish red parts are actually called bracts.The actual flower is relatively small and is light yellow and hidden in the axil of the bracts.

Here is a photo of the unripe pisang awak, which was found today in the Indian sundry shop in Oerlikon. Take a closer look at the rulers and the tape measure to see the dimensions. Note the angles lengthwise down the skin. 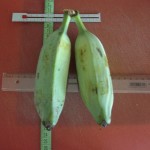 Pisang awak for the pengat recipe 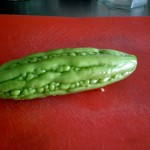 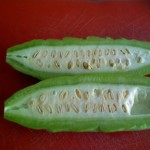 A bitter gourd cut into halves

Do you know this vegetable? There is an attempt to grow it in my garden. However, the plant is relatively small at present with its four leaves. It took a long time to germinate, more than 3 months and requires much sunshine.

If you were in an Asian Supermarket, you would see Asian women buying this while their other half, mostly Europeans, would ask what it is. The response given is, “Bitter vegetable, very healthy”. No child would eat this vegetable. You either love it or hate it.

It is a bitter gourd, bitter melon or bitter squash in Englisch, bitter cucumber (translated) from German, fu gua, foo gwa or fu kua, all bastardised spellings of the name in Cantonese, kǔ guā in Mandarin/Pǔtōnghuà, peria in Malay and Pavakkai in Tamil. The Chinese names definitely tell you that this vegetable is BITTER!

Likewise there are innumerous methods to reduce the bitterness. My grandmother put the slices in a heated pan and toasted the slices until the colour changed. My aunty soaked the slices, cubes or rings in a bowl of cold water for at least half a day. My best friend’s mother would rub salt into the halved gourd and then rinsing off the salt after an hour. My preference is the soaking method, because the cuts remain crispy which is especially suitable when making a salad.

The appearance varies in as many ways as its name does. You could distinguish the Chinese bitter gourd from the Indian or Thai variety. 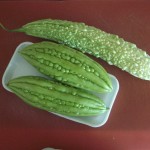 Two Chinese next to an Indian bitter

If you want to know whether you are a fu gua lover or not, come try out one such dish at Nenek’s Dinner for Four.

6th Event in the Year of the Horse