On 31st January 2014, the Chinese Year of the Horse begins. The modern Chinese especially those from mainland China call this their Spring Festival.

If you are interested on how this festival is celebrated, just send an e-mail to joanna at nenek dot ch and I would reactivate the newsletter which was published at the beginning of 2013.

Meanwhile let us look at the last month of the Year of the Snake, which runs from 1st Jan. to 30th Jan. 2014. The last month of the year is important for the Chinese because on the 24th day of this month which coincides this year with 24th January 2014, the Kitchen God leaves the earth  to make his reports to the Jade Emperor, the highest Tao God. That is what the taoists believe.

Every Chinese taoist family has an altar consisting of a paper image (in modern times often replaced by a wooden tablet) of the Kitchen God on a little ledge which could be a simple shelf nailed to the wall above the stove throughout the year. On this ledge the joss stick urn with candle stands on both sides are placed. 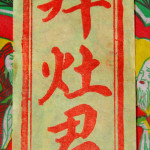 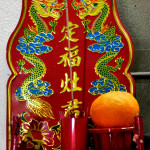 A modern altar with a tablet of the Kitchen God

My favourite version, among about 40 others, of how his altar came to be there originated around 2nd Century BC:

Zào Jūn was a gambler. He sold his wife to finance his gambling and to redeem his debts. This addiction drove him into utter poverty. One fine day he was begging at the house of his former wife. She pitied him and gave him baked pies and told him to eat them to at least maintain the remnants of his little strength. Alas, he was such an incorrigible gambler that he sold them immediately to resume his gambling. He lost. He naturally went back to his former wife to beg for more. He found her in the kitchen. Unprepared that he could be back that soon, she asked him about the pies and she told him that there was money hidden inside. On hearing that, he was so aghast at his own stupidity that he threw himself into the flaming hearth.

She wished her ex-husband could have a better life in the next world so she put up an altar near the stove and prayed for him to the Jade Emperor. When questioned by the members of the family who had purchased her, she told them that the altar was for the Kitchen God who had the following duties:

There are not many Chinese who would hesitate to erect such an altar to secure their share of good fortune and to enjoy longevity. In conservative families, the father has this honour. To double the chances of attaining these goals they pray with burning joss sticks daily, fruits and tiny cups of tea are offered on the 1st and 15th day of the Chinese month and on his birthday, 3rd day of the 8th lunar month (27th Aug 2014). The ultimate offering is made on the 24th day of the 12th lunar month with candied fruits, sweet and gluey rice cakes. 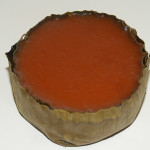 The Nián-gāo of my childhood 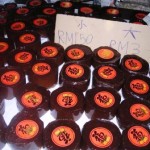 Nián-gāo sold at a market stand in Kuala Lumpur 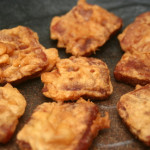 Nián-gāo remake after the new year

They hope that the sweetness would induce him to make a good report about them and the glueyness would keep his mouth closed against betraying their bad deeds.

To ease the Kitchen God’s journey to heaven, his effigy and a paper horse would be burned. Straw and tea would be thrown into the fire, straw to feed the horse and tea is to quench the thirst of the Kitchen God and the horse. Firecrackers are lighted to frighten the evil spirits from obstructing this journey. Some glowing cinder from the fire would be put into the stove to signify “new life” while a new shrine is installed for the return of the Kitchen God on the 4th day of the new year (3rd Feb.2014).

Nenek’s Dinner for Four in Jan. 2014 is making a short break in this month. Kindly check the next newsletter for the next event.