Before the Chinese Year of the Horse begins on the 31st. January 2014, lets us take a look at the festivals of the other ancient immigrant population, the Indians/Tamils. Thaipusam was dealt with last March. The Pongal celebration was left out. Unlike Thaipusam which is on 16th January 2014, Pongal is not a publich holiday.

What is Pongal? It is the Hindu Thanksgiving taking place this year two days ahead of Thaipusam. In my opinion it is the equivalent of Thanksgiving in the US and US influenced countries and the Chinese Mid Autumn Festival. The links below give a fairly good description of this festival, the rites and the food.

My family was admittedly too complacent to want to know more about our neighbours. We heard their music. We, children, played with our Tamil peers and we joined the crowd to watch their religious processions. We perceive them draw their kolams at the threshold of their houses and their festive clothes. I enjoyed particularly their food but we asked no questions.

Nor did we question the Malays, our other neighbours, although they are the majority. What we cared for, were the public holidays which came with some of these festivals.  The first one this year is Prophet Mohammed’s Birthday, also called Maulud Nabi on the 12th day of 3rd month of the Muslim calendar Rabi’ al-Awwal corresponding to the 14th January in Gregorian calendar. This is rather quiet in comparison to the Chinese and Hindu festivals in this month because the Malays attend religious lectures and read the Koran. 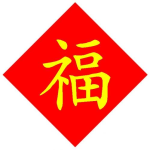 As the year of the horse begins, the first event of this year is a Chinese New Year dinner with all the symbolics thrown in.

1st Event in the Year of the Horse