My childhood memories of December are connected with Dōng Zhì (冬至), the Winter Solstice which takes place every year on the shortest day of the year. This day could be 21st., 22nd. or 23rd of December.

I was not aware how old this festival was. The Chinese begun this tradition in the Han Dynasty, 200 BC to 200 AD. My perception was of the buzz and fuss which took place on this day. The whole household was turned topsy turvy to be dedusted and scrubbed thoroughly. It was exciting to see so much activity and to see our neighbours bustling in the same way.

When the cleaning was done, the women would get together to make tāngyuán, a sweet soup of glutinous rice balls and naturally a sumptuous dinner as well to celebrate the end of the longest night of the year because the following days would have longer and longer daylight hours. 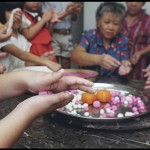 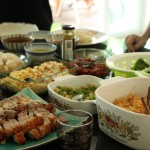 Look at this sumptuous food galore for the occasion 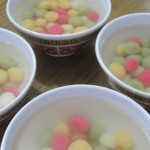 It is a reunion as well as a harvest festival, the latter no longer plays a big role in our urbane society today. Neither does the thorough cleaning custom.

It would be extraordinary if the food made did not have a symbolic value. Tāngyuán is almost homophonous with tuányuán (reunion), yuán is a circle in English and a circle has no loose ends. Therefore a soup with little round balls signifies wholeness and unity. What else can sweetness signify other than prosperity!

Some Chinese coloured these glutinous rice balls to make the soup attractive. Others fill them with sesame, red bean paste or ground peanuts. Then there are those who fill them with minced meat. It is not my favourite, but then I do not have a sweet tooth. Naturally a savory soup could be made, if one really wanted to, but most Chinese do not want to renounce the “sweetness of life “.

This introduction is incomplete if you do not know why tāngyuán is eaten on winter solstice day.

The grandmothers in the village those days, told the following story:

“During the Han Dynasty, Zhang Zhongjing (a physician) saw on a cold winter day (winter solstice) that the poor were suffering from chilblains. He felt sorry for them and ordered his apprentices to make dumplings with lamb and other ingredients for distribution among the poverty strickened to warm them up.  These dumplings were named ‘qùhántāng’ or dumpling soup that expels the cold.  From then on it became a tradition to eat dumplings on dōng zhì day.”

The legend on the name tāngyuán is also my heritage from those grandmothers. They said:

“During the Yongle era of the Ming Dynasty, this glutinous rice ball soup was called yuánxiāo, a name derived from the Yuánxiāo festival, or the Lantern Festival which literally means first evening, being the first full moon or new moon after Chinese New Year. This name prevails in northern China.

In southern China, they say that during Yuán Shìkǎi’s rule (1912-1916), he found that yuánxiāo sounded identical to ‘remove Yuán’ (to remove him, Yuán) therefore he ordered it changed into tāngyuán  because tāngyuán literally means round balls in soup or round dumplings in soup. Since then, the Chinese emigrants in South East Asia use this name.

Since Christmas is around the corner  Nenek will accept reservations until 7th December and only for the date mentioned below and a christmas menu at her descretion:

10th Offer in the Year of the Snake